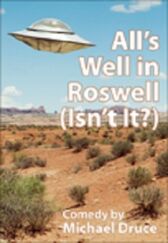 Large Mixed Cast
An unidentified flying object crashes onto a ranch near Roswell, New Mexico, in 1947

Ranch owner Ulysses T. Boone soon has his hands full trying to deal with the press, government authorities, and his family

It turns out this is not the first time T. Boone has had a close encounter

And now - aided by a nosy science fiction writer - agents from Area 51 are about to discover T. Boone's secret

With only minutes to spare, everything hinges on a third-rate film company making a cheesy science fiction film to create a diversion