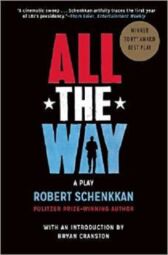 "I love you more'n my own daddy, but if you get in my way, I'll crush you"

It tells the story of the tumultuous first year of the presidency of Lyndon Baines Johnson, thrust into power following Kennedy's assassination and struggling to hold onto the White House in an election that forces him to make concessions

In 1964, this pivotal year in American history, he passes a landmark civil rights bill, but begins his fateful descent into Vietnam

By any means necessary

Breaking Bad star Bryan Cranston played the lead role of LBJ in the play's celebrated Broadway performance at the Neil Simon Theatre, for which he was awarded the Tony Award for Best Actor

In this volume, Cranston provides a never-before-published illuminating and personal introduction to the play

"A magnificent work ... a brilliant portrayal no less epic than the great tragedies of classic literature" ~ Roma Torre, NY1

"One of the highlights of the Broadway season" ~ Associated Press

"A theatrical coup non-stop action. The suspense of a first-class thriller" ~ NY1