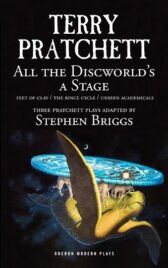 The three plays in the Collection are ...

Someone is killing Lord Vetinari, Patrician of Ankh-Morpork

But it's not just Vetinari

Across the city, people are being murdered, but there's no trace of anything alive having been at the crime scene

Commander Vimes, Head of the City Watch, is a man who hates 'clues'

He and his team must question everyone the butcher, the baker, the candlestick maker

In a city teeming with vampires, werewolves, dwarfs with attitude and golems, Vimes must solve the crimes and save the Patrician.

As a punishment, failed wizard Rincewind is given the task of guiding and safeguarding the Disc's first tourist, Twoflower (with his magical luggage on legs)

As they travel the city and beyond, they meet the world's oldest hero, Cohen the Barbarian

With him, and with Bethan (a qualified sacrificial victim), they encounter druids, trolls, adventurers, a hairdresser and a power-crazed wizard

And did we mention that Rincewind also has to save the world from destruction by a huge Red Star destined to collide with the Discworld at Hogswatch?

The Rince Cycle is mostly based on The Light Fantastic, with bits of The Colour of Magic and Sourcery added for good measure

'Two households, both alike in dignity, in fair Ankh-Morpork, where we lay our scene'

Until a Dimwell fan falls for a Dolly Sisters girl

Luckily they're coached by the mysterious Mr Nutt - no one knows anything much about Mr Nutt, not even Mr Nutt

As the match approaches, four lives are entangled and changed forever