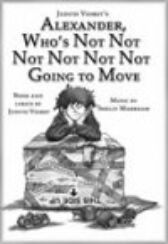 Alexander has just received some really bad news from his parents ...

His dad has taken a job in a city a thousand miles away, which means that he and his mom and his dad and his bossy older brothers, Nick and Anthony, are going to have to move to a whole new city

And even though his mom says, "Wait, you'll like it," Alexander already knows that he'll hate it

Anyway, he can't bear to leave the people and places he loves, so he decides that he won't move

First he tries to live with three different neighbors. Then he tries to build a tent so he can live by himself. Then he decides he'll hide so that his parents'll never find him, but that doesn't work out either

While Alexander barricades his bed-room door, his mom and dad and even his brothers find some special ways to make it easier for Alexander to leave. They also help him to understand that home is "where your family is, where you're with the people who love you best of all"

Commissioned and premiered by The John F. Kennedy Center for the Performing Arts. Unit set - runs about an hour