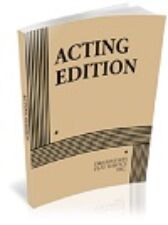 The place is the Underworld, and the first characters we meet are Pluto, who is snoozing in a beach chair before the gates of his palace, and Orpheus, who has come in search of his lost bride, Eurydice

Orpheus, who happens to be a bit paunchy, and from Yonkers, has been told that Pluto will be able to restore Eurydice to him, despite the fact that she choked on a chicken bone at their wedding reception - before they could even fly off on their Bermuda honeymoon

Pluto is glad to oblige, but makes the proviso that Orpheus must not look back at Eurydice as he leads her out of the Underworld

The condition is accepted, but Eurydice, a bleached blonde who is not amused by the situation, presses Orpheus so urgently to give her a kiss that at last he does - with the results foretold in legend

Produced Off-Off-Broadway, and also selected by Stanley Richards for his Best Short Plays series, this imaginative and very funny retelling of the Orpheus/Eurydice legend places modern characters in a classic setting, to great theatrical effect

One-act -Especially recommended for play contest and school use