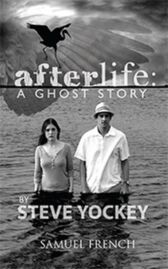 Married couple Connor and Danielle prepare their beachfront home for an impending storm, packing up items stained by painful memories they don't know how to talk about

And when the storm rolls in faster than expected and a great wave rises up to drag them under, it may be too late for them to come to terms with their history and escape the haunting world of unsent letters, unexpected snow, unfinished sand castles, unrelenting birds, and unforgettable loss that threatens to swallow the pair forever

" ... a play doesn't have to be haunting, literally, in order to be intriguing and mysteriously compelling. Ghost or no ghost, afterlife aims to raise some goosebumps" ~ American Theatre Magazine

"Suffice it to say that if the explosive ending of the first act delivers chills of the old-fashioned, scary-movie kind, the final scenes of afterlife leave a lingering chill of a more ambiguous sort" ~ The Boston Globe

DANIELLE - a woman, thirties, a wife, with a sharp wit and wounded heart, unrecovered and angry but putting up a front, holding a grudge epic in both scale and focus

CONNOR - a man, thirties, a husband, attractive, affable, even charming; doing his best under the circumstances, but sorely mistaken in the belief that things are getting better

YOUNG MAN - a young man, late teens, optimistic, hopeful and brave, fueled by half-memories & things collected along the way; his clothes are worse for wear

THE PROPRIETRESS - a woman, effortlessly assured, precise, very neat and put together, hospitable running her teahouse, she is the ocean and means business

THE SEAMSTRESS - a woman, a raw nerve, taunting, mocking, a guest long past her welcome and unwilling to leave; rage, regret & laughter while wasting away

BLACK BIRD - a large, articulate bird, black feathers, warm and gentle in demeanor, seemingly playful but only as a means to an end; a functionary, a messenger

POSTMAN - a letter carrier, someone who lives at sea, brusque but humane, in layers, a jacket & wool cap with a satchel; a functionary, a messenger