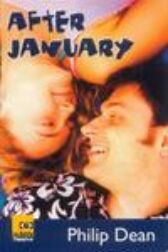 Alex has eighteen days until he finds out if he got into Arts Law, a week in Caloundra to sleep, swim and watch the cricket, and a mother with a keen interest in his sex life

Fortuna keeps bees, has a nose-ring, and a father who likes to do pottery in the nude

When this unlikely pair meet, the results are both hilarious and heartwarming

Adapted by Philip Dean from Nick Earls' award-winning novel, After January is a play for people of all ages about what happens when someone stops waiting for life to happen and begins instead to live it