Advice from the Players 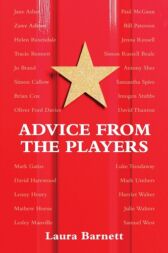 Want to know what it's really like to be a working actor?

How do you get over stage fright?

Make the most of auditions?

And nothing compares with this frank, informative and often very funny Collection of tips and advice from stars of stage and screen, learned the hard way from years of experience working in the performing arts

Advice from the Players features a host of tips and guidance on every aspect of the actor's craft from the likes of Julie Walters, Lenny Henry, Harriet Walter, Simon Callow, Jo Brand, Simon Russell Beale and many others

Drawing directly on their own experience, they offer wit and wisdom on key topics, including:

Candid, passionate, sometimes contradictory, often very funny this is a book to turn to whenever you're in need of guidance or inspiration - whether you're a working actor, at drama school, or involved in amateur theatre

And it makes a great gift!

"You need to be nervous. You'd be the walking dead if you weren't. Acting is a frightening job stepping out in front of a thousand people and saying "Watch me" for the next two-and-a-half hours. I hate people who call us "luvvies". I'd love them to learn Hamlet and then stand next to them backstage waiting to go on for the first time. Then they can talk to me about being a "luvvy"" ~ Antony Sher

On Coping with Rejection

"My mother used to say, "What's for you will not go by you" It's a great phrase to keep in mind when you don't get a job" ~ Brian Cox

"Acting is the best job in the world. It's miserable, and horrible, and 80% of actors are out of work. But it's also endlessly fascinating, and diverse, and without it, I would never have known about string theory, or currency exchange speculation, or Alzheimer's. And even if 80% of actors might be out of work, that means that 20% are in work" ~ Simon Russell Beale