Adam and the Experts 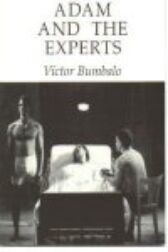 Adam and the Experts may be the most important play to deal with the AIDS crisis in gay society since William Hoffman's AS IS and Larry Kramer's THE NORMAL HEART sounded their anguished alarms. Since those two dramas were first produced Off Broadway, thousands have died, and thousands more who have gotten AIDS fight to survive. Mr Bumbalo's play expresses a mood of exhaustion, fatalism and embattled determination that, as the decimation continues, has become an overshadowing fact of homosexual life.

It has, at least, become possible, Mr Bumbalo's play suggests, to find some bitter humor amid the tragedy. ADAM AND THE EXPERTS is quite funny in a dry satiric way. Most of the humor is situational, deployed by the playwright to reveal the pathetic, ludicrous defenses that people adopt to shield themselves from terrifying realities...." Stephen Holden, The New York Times. Originally produced by 3-Dollar Bill Theater in New York - unit set