Acting with Passion - A Performer's Guide to Emotions on Cue 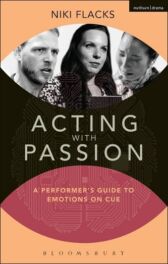 Whether it's dealing with nerves, engaging the body, quieting the inner critic, auditioning, creating a character, or playing comedy, this step-by-step guide will prove invaluable

Written with verve and accessibility, Acting With Passion uses practical exercises to guide the actor through each stage

Chapter One: The Holy Grail Emotions on Cue
Chapter Two: Memorisation A Fresh Look and No Whinging, Please
Chapter Three: Opening the Dungeon Pain, Fear, Sadness
Chapter Four: Going Deeper Opening the Dungeon to Rage
Chapter Five: Flacksing When? How? Where? How often?
Chapter Six: Gesturing Why Should It Be So Difficult?
Chapter Seven: Auditions Your Chance to Shine
Chapter Eight: Rehearsal Strategies Incompetent Directors and Other Obstacles
Chapter Nine: Lovely Challenges Style, Character and Comedy
Chapter Ten: Namaste Yoga for Actors
Chapter Eleven: The Future is Yours The Best Revenge is Happiness

"A frighteningly simple super-highway into an actor's well of creativity and passion" ~ Stephen Beckett, actor

"Whilst I personally resist her demonizing of intellect, that caveat is outweighed by the delightful mix of inspired pragmatism and no-nonsense speculation in Niki Flacks' book that will not only be solidly useful for any actor, but will stimulate that voracious curiosity which is the lifeblood of a fulfilling life in our business." Mark Wing-Davey, Chair, Graduate Acting Program, Tisch School of the Arts, NYU