A Play, A Pie and A Pint - Volume One 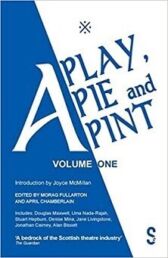 After running for fifteen years, the founding principles of A Play, a Pie and a Pint remain steadfast - a new play at lunchtime every week that lasts no more than an hour

Accompanied by a pie and a pint!

The six plays in this Collection are ...

Chic Murray - A Funny Place for A Window ~ Stuart Hepburn

Do Not Press This Button ~ Alan Bissett

"A bedrock of the Scottish theatre industry" ~ The Guardian

‘An extraordinary engine of new writing and new talent. For established writers it’s a chance to experiment … new writers it’s a chance to be heard. The restrictions of the form are simple – small cast, 45 mins, limited set; but, within those restrictions, a whole world is possible. A Play, A Pie and A Pint is one of those simple ideas that changes everything’ ~ David Greig

‘A major part of Scotland’s new playwriting landscape’ ~ The Scotsman