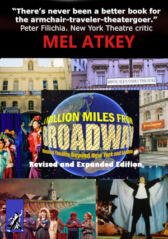 Musical theatre is an international form, not just an American one

It can take root anywhere, although the form is so linked in the public’s mind with Broadway that it is sometimes referred to as the “American Musical Theatre”

In fact, the late Peter Stone, a former president of the Dramatists Guild and a noted Broadway librettist, once claimed that no musical theatre existed outside of New York City