A Local Man - A Play about Ben Chifley 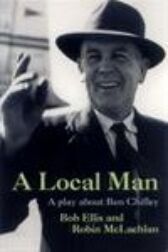 Late in the afternoon of 9 June 1951, Ben Chifley returns to his modest home in Bathurst to write a key speech which he will deliver at the ALP Conference in Sydney the next day

Having recently led his party to its second defeat at the polls, it is a time of challenge for the Labor leader

It's a time for decisions, and it's equally a time for reflection by Chifley on his life as a national political leader and as a man - a local man

" ... a strong and affectionate monologue that is not mere hagiography, but an effective portrait behind the iconic political figure" ~ Sydney Morning Herald