A Little Murder Never Hurt Anybody 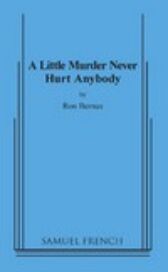 It's New Year's Eve at the Perry mansion, and Julia and Matthew Perry seem to have it all

But Matthew wants something more - to be rid of his wife Julia so he can have some real fun!

He resolves to murder Julia by the new year's end, and tells her so

She vows to stay alive, and tells him so

But while Julia cleverly dodges Matthew's devious murder attempts, the Perry friends and staff are dying off mysteriously - it seems Matthew is successful in murdering everyone but Julia!

As the bodies are falling, dim-witted daughter Bunny contemplates calling off her wedding to unwitting Donald since all the intended gift-bearing guests are dying

Enter Detective Plotnik - a Sam Spade reincarnation who suspects everyone, but hasn't a clue

MATTHEW PERRY - Mid-50s, a man who from birth has had more dollars than sense. He is facing a minor mid-life crisis
BUTTRAM - 40s-50s, the family butler for many years, though convinced he is above being a butler - at least for this family. He is given to crying jags, and harbors a terrible secret
JULIA PERRY - Mid-50s, Matthew's wife. A classy, intelligent woman who loves her husband despite his many faults - and is always a step ahead of him!
BUNNY PERRY - Mid 20s, Matthew and Julia's sweet, but dim-witted and deeply shallow daughter
DONALD - Mid-20s, Bunny's fiancé. He is very earnest, and very much in love with Bunny, despite her lack of savvy
PLOTNIK - 30s-50s, a witless detective. He was born 40 years too late, and read too many Dashiell Hammett novels. He fancies himself a cynical gumshoe, but lacks the savvy to locate, let alone solve, a crime

"A delightful surprise ... an evening of fun just on the proper side of slapstick" ~ Lansing State Journal

"Comedy packs laughs ... a delightful play ... a medley of laughs ... the play has charm, and is really funny" ~ News-Herald, Southgate, MI