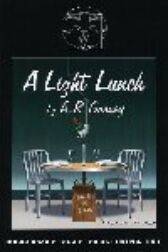 "A R Gurney's tasty new play about our ex-President George Bush, is a model of political theater ... exquisitely self-aware, A Light Lunch uses the theater - and self-deprecating comments about A R Gurney himself - to make serio-comic points about George Bush throughout the play" ~ Barbara & Scott Siegel, TheaterMania

"The gentlemanly playwright A R Gurney casually tosses his own metaphorical shoe ... in the direction of our departing president in his latest politically minded play, A Light Lunch. Mr Gurney take[s] jovial, self-deprecating jabs at his own foibles, and the follies of the theater business too" ~ Charles Isherwood, New York Times

"A R Gurney's jokey new play is refreshingly unlike most contempo American political theater. Plenty of laughs, and no shortage of fun moments between the performers. It's a "Lunch" worth chewing over!" ~ Variety