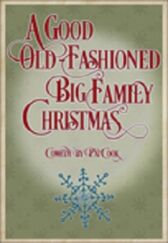 Hayden's wife, Judith, and her sisters, Carla and Beth, are worried about their parents

"They argue all the time," Judith says

When she mentions this to Hayden, he casually suggests maybe the women should spend some time with their parents Jack and Arlene and squelch the arguments

The next thing Hayden knows, Judith is planning a huge Christmas party and inviting the whole family!

"And it was all Hayden's idea!" she boasts

This doesn't set well with his brothers-in-law, who have a hard time getting along with Jack

However, as time gets short and the party draws near, suddenly everyone is on their best behavior.

Everybody is being good

But is it possible to be too good?

That's what Jack and Arlene suspect when they arrive

"Judith and Hayden must be having problems!" Arlene suspects

So she and Jack also start putting on an act

And by the time Hayden's parents, Tom and Marjorie, join them, this party has more intrigue behind it than a whole host of spy novels