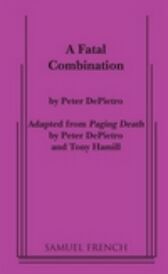 A flamboyant, aging and loveable Greek art dealer; a reticent and revengeful librarian; a not so shallow bleached blond actress and a literary scholar all descend upon a posh Boston hotel to retrieve a rare Byzantine treasure secured in the hotel vault where it awaits an upcoming museum exhibition

Each wants the treasure enough to kill for it

George and Margaret Manning, a sharp eyed husband and wife detective team akin to Charlie Chan and Number One Son, work hand in hand to solve this deliciously sinister plot of international intrigue

"[The audience], at times, hurled suspicious accusations at one another with the vigor and purpose of discus throwers at a championship meet" ~ Boston Globe