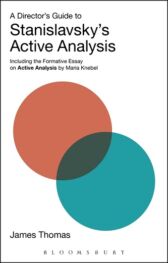 Includes the Formative Essay on Active Analysis by Maria Knebel

By uniting 'mental analysis' and 'études', Active Analysis puts an end to the problem of mind-body dualism and formalized text memorization that traditional rehearsal methods foster

The book describes Active Analysis both practically and conceptually ...

Part One guides the reader through the entire process of Active Analysis, using A Midsummer Night's Dream as a practical reference point

The inspiration here is the work of the Russian director Anatoly Efros, whose pioneering work led the way for a reawakening of theatre in post-Soviet Russia

A Director's Guide to Stanislavsky's Active Analysis provides the first detailed explanation of Active Analysis from the director's perspective, while also meeting the needs of actors who seek to enhance their creative involvement in the process of play production

I. Choosing the Play

IV. An Introductory Conversation with Stanislavsky about Active Analysis

PART 2: ACTIVE ANALYSIS OF THE PLAY AND THE ROLE by Maria Knebel

I. General Principles of Active Analysis

V. Active Analysis Compared to the Method of Physical Actions