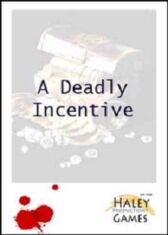 None of the dialogue is scripted - it's all improvised - the role of the guests is to actively solve the case by asking the suspects questions, following them, eavesdropping on their conversations, and so on

Whatever it takes to discover Who-dun-it

With a treasure hunt that promises a pot of gold at the end of its "rainbow", that's how

These are the players who will be given a complete script and full knowledge of the mystery :

Seamus O'Malley - The pub owner who'll do anything to keep his tavern afloat. He's sunk every last penny into this PR campaign. Now all he can do is cross his fingers and hope it's a grand success

Officer Johnny Malone - Seamus' cousin. He thinks Seamus is nuts to do this. How dare he give away the doubloons that have been in his family for generations! Especially when Johnny is his last living relative and thought he would get them somewhere down the line!

Peter Blackwell - He's the mastermind behind this "Pot of Gold" PR campaign for Seamus. And like Seamus, he has a lot riding on the success of this scavenger hunt

Irma Snell - Peter's research analyst. She's been with him from Day One (13 years ago) despite Moira's dislike of her. Of course Seamus could change her life forever if she has her way!

Lurleen Johnson - A contestant in the hunt. Irma swears she's seen this woman before although Lurleen claims she just got into town from Texas

Remember, EVERYONE will be actively involved in this mystery because it will be their job to solve the case and because you'll be encouraging them to come in costume and in character. Use any or all of these secondary suspects if you have "extra" cast members you want to use

You will NOT give them a script but you will give them a description of their character and let them run with it :

Ingrid Snell - Irma's sister. They are very much alike and protect and defend each other to the death. Ingrid wants a job with Blackwell's List - the same job Lurleen Johnson has now

Desmond Lacey - A friend of Johnny's whose help he's enlisted tonight as "assistant" security guard. Cagney will be thrilled to help Johnny in any way he can throughout the evening. Being a security guard makes him feel tough and brawny

Bonnie Cochran - Seamus' lawyer here to oversee all things legal. She can advise Seamus on anything and everything

Robin Leacher - He or She is a reporter for your small town newspaper who was sent to cover this event. S/he really wants to be on TV so likes to "report" the goings on as they happen as if s/he were in front of a TV camera

Maggie May O'Connor - Seamus' girlfriend who wants a commitment from him and doesn't like Irma moving in on her territory!

NUMBER OF PLAYERS: Up to 125 plus the Primary Suspects (your cast)

LENGTH OF MYSTERY: about 2 hours

You'll need to provide 6-8 people willing to take part in the mystery as the primary suspects, victim(s), detective and killer (see below)

They'll have full knowledge of the script, which means they'll know "whodunit"

The rest of your guests will take on the role of Detective and it will be their job to solve the case. Everyone, therefore, will have a crucial part in the mystery

The game lasts about 1 ½ to 2 hours but you can, of course, make it longer by allowing more time between the scenes/action

Your guest actors won't have to memorize a lot of dialogue but they will have to be familiar with a sequence of events or timeline that will move the mystery through the clues, the murder(s) and the solving of the crime

Upon arrival, the guests receive a program that will be a guideline for the mystery (included in this package)

The primary suspects start to mingle in character, usually during the reception, and begin setting up the mystery with clues, arguments, gossip, that sort of thing

Just about the time the first course is served, the guests witness the (1st) murder

The solution is dramatically revealed around the time dessert is served