A Critical Companion to the American Stage Musical 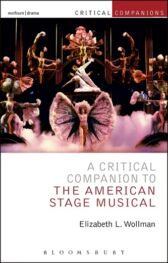 This Critical Companion to the American Stage Musical provides the perfect introductory text for students of theatre, music and cultural studies

Emphasis is placed on commercial, artistic and cultural events that influenced the Broadway musical for an ever-renewing, increasingly broad and diverse audience: the Gilded Age, the Great Depression, the World War II era, the British invasion in the 1980s and the media age at the turn of the twenty-first century

Supplementary essays by leading scholars provide detailed focus on the American musical's production and preservation, as well as its influence on daily life on the local, national, and international levels

For students, these essays provide models of varying approaches and interpretation, equipping them with the skills and understanding to develop their own analysis of key productions

Chapter 1 The Birth of (the Popular Culture of) a Nation: Stage Entertainment in a New Land

Chapter 2 The Civil War Era to the Gilded Age

Chapter 7 The Megamusical to Hamilton

Chapter 8 Other Angles: Different Approaches to the American Stage Musical

Putting It Together: A Step-By-Step Look At Musicals from the Page to the Stage ~ Robert Meffe (San Diego State University, USA)

Off Off Off Off Broadway: Musicals and the Regional Theater ~ Laura MacDonald (University of Portsmouth, UK)