A Brief History of Women 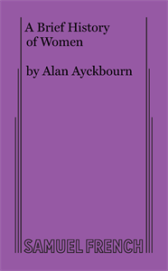 From his first encounters as a young man in 1925 to an unexpected reunion late in life, Anthony Spates’ romantic progress is charted against the backdrop of an equally remarkable old manor house in this hilarious and gently touching comedy

"There’s a lot of loss and longing in this journey, but the play’s elegiac, reflective tone proves both moving and liberating as it reaches an ending of haunting beauty." ~ The Stage

"...he is writing and directing with as much wit, insight, originality and mischief as ever, still surprising, still setting himself theatrical puzzles, still so spot-on about the arts, education, marriage, romance, loss and life's vicissitudes for men and women, but now with added reflection and humane sagacity." ~ York Press