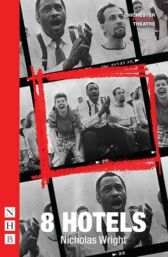 His Desdemona is the brilliant young actress Uta Hagen

The actors are all friends

But they are not all equals

As the tour progresses, onstage passions and offstage lives begin to blur

Based on true events, 8 Hotels was first staged at the Minerva Theatre, Chichester, in 2019, in a production directed by Richard Eyre