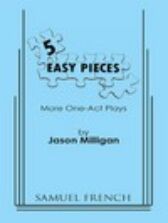 Originally commissioned and produced by New York's prestigious Primary Stages Company as a response to the events of 9/11, "Rituals" is the heart-wrenching tale of Dave and Janie, an upwardly-mobile couple whose lives have been shattered by the death of their young son. Dave brings Pat, his therapist, to their high-rise condo hoping that Pat can help put a stop to Janie's compulsive rituals, which Dave fears are causing her to retreat from reality. What begins as an intervention quickly escalates into a heated confrontation and Dave realizes that rituals may actually represent a valid way to survive in the aftermath of a terrible tragedy

Originally staged at the Egyptian Arena Theater in Hollywood, this darkly comic piece (reminiscent of the style of David Mamet) takes place in the back room of a Long Island coffee shop as three cops covertly cook up the "perfect crime." Their scheming is at turns edgy, pointed and hilarious. But can they trust each other? that's the question. What begins as a simple burglary plot escalates into a cat-and-mouse game and finally into a dramatic confrontation, forcing each of the men to come to grips with the fact that trust is a two-way street. And, once it's broken, there's no turning back

Late one night in an Oakland kitchen, in December of 1969, three teenage girls sift through their Beatles albums for "clues" to the supposed death of Paul McCartney. Adopting "witchy" sounding names and lighting candles to create a mystical mood, they stage their own impromptu séance. With trembling voices and a homemade Ouija board, the girls attempt to contact Paul from beyond the grave which yields surprising results! As it turns out, an unexpected visitor brings insight and healing to at least one girl's life, restoring a fractured family in the process

The Fire-Breathing Lady and the Sugarplum Fairy - M5,F3

Gloria Bouvier is a Southern housewife and devoted (some might say demented) stage mother of great determination. As the hour draws near for the premiere of the annual elementary school production of The Nutcracker, Gloria tries every ploy she can think of in order to manipulate Jim Clark, a beleaguered schoolteacher (and the play's director) into giving her daughter a starring role in the production. In the spirit of Light up the Sky and You Can't Take it With You, this fast-paced, whimsical comedy is filled with eccentric characters, has several great roles for kids, and puts a fun-spirited, quirky spin on the holidays

The play opens as Charlene, an eccentric young Southern woman, struggles to "recall" all of the key lime pies that she prepared and sold the day before during a small-town bake sale. As it turns out, the ever-irresponsible Charlene was "borrowing" Tricia (her older sister)'s wedding ring when it fell into one of the pies! The situation is further complicated by the fact that Tricia is due at the altar in less than an hour and she wants her ring back! The two squabbling sisters embark on a frantic crusade to track down the various pies one by one until at last their search leads them to a local hospital room, where an elderly neighbor named Archibald Stokes lies comatose apparently due to the fact that he swallowed the ring! The girls must find a way to retrieve the ring, escape from the hospital and get Tricia to the church on time!