3 Guys in Drag Selling Their Stuff 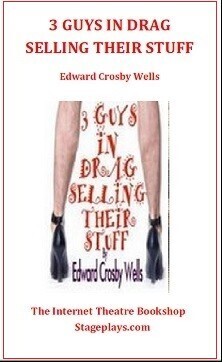 Diva, Lillian, and Tink - 3 men in drag - are having a yard sale

Diva sees herself the boss of everybody

Tink - confined to a wheelchair - is often misunderstood

Including Diva's mother who has the yard wired with eavesdropping devices!

And the explosive climax results in a police shootout

This is a raucous, raunchy, pee-in your-pants, more than a laugh-a-minute play

"With the help of some brilliant dialogue, and the clever antics of the three characters, your mind's eye will create the entire neighborhood including an elderly friend who is hit by a truck, a handsome Greek motorcyclist, and Diva's mother in the nursing home across the street. Lillian's punch, made especially for the occasion, is heavily spiked and the plot gets more outrageous as the "girls" imbibe" ~ KDHX, St. Louis

"This play does what Beckett was trying to do, but Beckett was too squeamish to face the facts of the decline of the West. Wells faces them with hilarious completeness, and therefore is able to be both funnier and more tragic than Beckett ever was" ~ Robert Patrick