2 Across - A Comedy of Crosswords & Romance 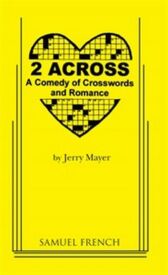 Two middle-aged strangers, a man and a woman, board an early morning San Francisco train

They're alone in the car

And both are doing the New York Times crossword

And she's a crossword pro and he always quits

When he tosses his puzzle away, she snaps

"Crosswords are a metaphor for life - those who finish, succeed, those who don't, fail"

So now he vows to finish

Two opposites in an enclosed space, attacking each other's values

But also being swayed and intrigued by them

Their trip is filled with unpredictable but believable surprises

Even a passionate embrace or two

And as the train ride ends, it's obvious each of them has been changed for the better

But will these two ever meet again?