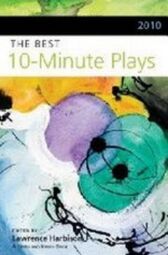 Divided into two sections - Plays for Two Actors & Plays for Three or More Actors - you can now get the best ten-minute plays produced during the 2009-2010 theatrical season all in one book!

In this volume you'll find a plethora of ten-minute plays, culled from hundreds received by publisher Smith & Kraus

All have been produced successfully and some have even won awards. These plays are written in a wide variety of styles

There are a few plays in this book by playwrights who are fairly well-known, such as Don Nigro, Carson Kreitzer, Elaine Romero, Bridgette A. Wimberly, Richard Vetere and P. J. Gibson

But most are by terrific new writers you never heard of, playwrights destined without a doubt to become far better known when their full-length plays get produced by major theatres

And you can read their work first here!