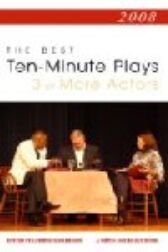 The hottest collection of 10-minute plays by American playwrights from 2008, essential for producers looking for high-quality plays and professors who need relevant and engaging material for their class work

Lawrence Harbison has assembled the most compelling comedies, dramas, fantasies, and mysteries of the year a chronicle of what this year's playwrights had to say about the world around them

Plays for Two Men and One Woman

The Adventures of ... by Kathleen Warnock
Antarctica by George Freek
How to Survive in Corporate America (A Manual in Eight Steps) by Ian August
In the Trap by Carl L. Williams
Moon Man by Jami Brandli
October People by Mark Lambeck
The Other Shoe by Lisa Soland
The Perfect Red by Paola Soto Hornbuckle
Squalor by Gina Gionfriddo
Three Turkeys Waiting for Corncobs by Don Nigro
To Darfur by Erik Christian Hanson
Whatever Happened to Finger Painting, Animal Crackers, and
Afternoon Naps? by Nora Chau

Plays for One Man and Two Women

Plays for Three Men and One Woman

Guys, Only Guys! by Jerome Parisse

The Birthday Knife by Jerome Parisse

Cabfare for the Common Man by Mark Harvey Levine

Plays for Four Men and One Woman