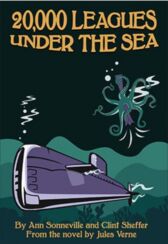 Large Mixed Cast
While this work is primarily an adaptation of a classic piece of literature, it also satirizes our love of '80s and '90s action-comedy films such as Die Hard,Blade Runner and Jaws

We join the prolific naturalist Professor Aronnax, his devoted assistant Conseil and the gritty harpooner Ned Land for an epic journey aboard the Nautilus, the world's first submarine

Forcefully led by the dangerous and enigmatic Captain Nemo on an unprecedented tour of the seven seas, our three heroes are confronted by harrowing challenges, incredible adventure, and a host of most unusual creatures

In this daring new adaptation of Jules Verne's classic 19th-century saga, an emphasis on action strips this adventure down to its essence, bringing spectacle and ensemble to the fore