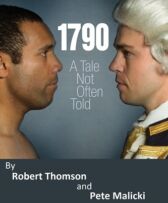 And also an Indigenous man named Bennelong of the Eora nation

But in pursuit of their common goal of positive collaboration between their peoples, they finally become friends