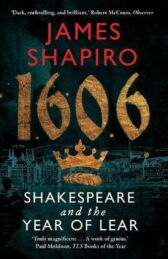 "Truly magnificent ... a work of genius"

1606: William Shakespeare and the Year of Lear traces Shakespeare's life and times from the autumn of 1605 when he took an old and anonymous Elizabethan play - The Chronicle History of King Leir - and transformed it into his most searing tragedy - King Lear

1606 proved to be an especially grim year for England

It was a year which witnessed the bloody aftermath of the Gunpowder Plot, divisions over the Union of England and Scotland, and an outbreak of plague

But it turned out to be an exceptional one for Shakespeare

Unrivalled at identifying the fault-lines of his cultural moment, before the year was out he went on to complete two other great Jacobean tragedies that spoke directly to these fraught times - Macbeth and Antony and Cleopatra

Following the biographical style of 1599 - A Year in the Life of William Shakespeare, a way of thinking and writing that James Shapiro has made his own, 1606 - William Shakespeare and the Year of Lear promises to be one of the most significant and accessible works on Shakespeare in the decade to come