1599 - A Year in the Life of William Shakespeare 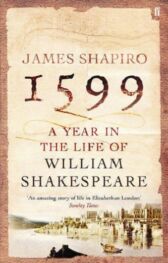 1599 presents a history of Shakespeare, following him through a single year that changed not only his fortunes, but the course of literature

The book brings the news, intrigue and flavour of the times together with detail about how Shakespeare worked as an actor, businessman, and playwright

In this one year, we follow what he reads and writes, what he saw, and who he worked with as he creates four of his most famous plays - Henry V, Julius Caesar, As You Like It, and Hamlet

FOR THE SEQUEL : 1606: William Shakespeare and the Year of Lear
click here