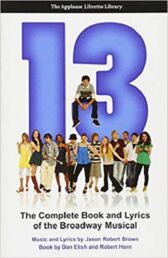 Large Mixed Cast
One of the most frequently produced new musicals of the last decade, 13 is a rollicking musical comedy featuring a cast exclusively made up of teenagers

Evan Goldman is two months from turning 13 years old, living happily in New York City, which he believes to be the greatest city on Earth

But then his world is blown apart by his parents' divorce, and he's dragged away from home to live with his mother in a small town in the Midwest

Facing a new life in a new place where the customs and culture are utterly alien to him, and with his bar mitzvah getting closer every day, Evan has to navigate who he wants to be versus who he really is,