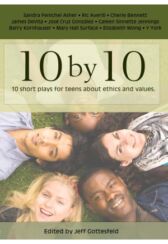 A Collection of 10 Ten-Minute Plays for Teenagers - some funny, some serious - exploring ethical dilemmas

Russell and Shelly promised their dad they'd be back from the museum by 3:30. Running out of time, Shelly refuses to leave as she stares at two statues of ancient Egyptian gods and ponders the mysteries of the universe

Kelso and Case-Tec are teenage brothers, home alone watching TV. The fact that Charlton Heston is on every channel helps to distract them from a physically abusive father and a mother in the hospital

Three siblings argue about how to divide their late father's estate

Out of Order ~ Cherie Bennett - F2

Zoey is at a school dance and runs into her ex-boyfriend. She goes into the bathroom to call one of her friends and has a run in with Eve - of "Adam and Eve" fame - who has been living in the air ducts since she was kicked out of the Garden of Eden

Two teenage girls have snuck out to go to a concert where they met their favorite rockstar. He promised to meet them at the nearby bus stop, but they've been waiting for a long time and it's getting late

Ian and Desie are both outcasts who struggle to deal with reality. They each handle it differently, but a chance meeting may be exactly what both of them need

A first-generation immigrant grandmother spends her days sitting out in the yard, killing any flies that come within reach. Kevin, her grandson, is curious why she hates flies so much, and thinks it's inhumane to kill them for fun

Will isn't enjoying himself at summer camp this year. His parents are particularly confused when they find out he got in a fight with another boy - until he explains that he's being ostracized for defending an unpopular girl